South England Pastries is a family owned and run business which manufactures and distributes a wide range of frozen pastry and pie cases. We are also the producers of Granny Mo’s Traditional Pies, a selection of traditional pies, pasties and pork pies of the finest quality. 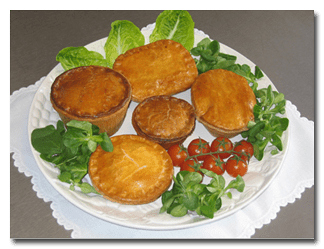 The business was started in 1966 by John Brown, originally as an independent retail butchers. In 1968 John and Maureen moved to Wokingham and opened their first butcher’s shop in the town which established a wonderful reputation, to which people came from all over the country to shop.

In the late 1980s John found that he couldn’t source pies of a good enough quality to sell, so he decided to make his own. With the help of Maureen, he developed a range of products that had a traditional, home made flavour,  and were full of top quality meat and gravy.

At that time we only sold our pies in our own shop, but what we did caught the interest of other, similar, businesses and a business grew out of supplying these other people with pastry to make their own pies. Soon after John was also persuaded by other shopkeepers to sell them some of his pies.

In 1992, Richard Brown graduated from university and entered the business. He had worked for his father in his school and college holidays and already had experience and knowledge of the business. From that point the business grew rapidly and in 1996 the family took the decision to sell the butcher’s shop and concentrate solely on their pastry and pie products.

The business is still owned and run by John and Richard and still makes products based on Maureen’s recipes. Maureen is now a grandmother who is known by her six grandchildren as Granny Mo.

South England Pastries in the news: